This page will describe the Kodi recommended method to name Movie files and create the folder structure to save them in. Your folder structure and files will be placed within your Source folder which was detailed in the previous page of the guide.

The default scraper used by Kodi for Movies is the TheMovieDB (TMDB). Other scrapers are available and can be found by searching the Kodi site here 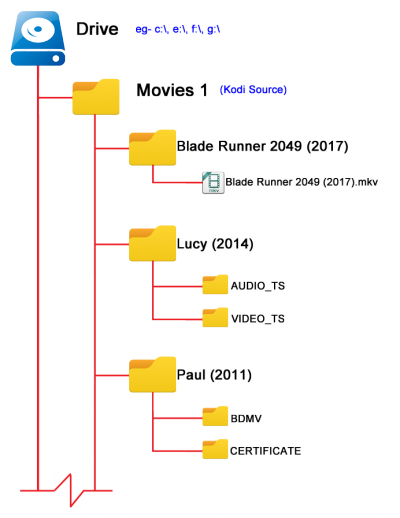 Once the Source has been created on your drive, there are are two options on how to store your movies. 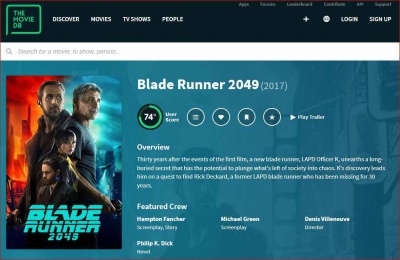 This method is the Kodi recommended method for storing movie media and is detailed in the images to the right. There is some limited flexibility to correct naming, but not all methods are 100% guaranteed to work. This section deals with Kodi best practice and has been proven to be the most reliable and robust method.

Placing movies in their own folder allows saving of local artwork and nfo files alongside the movie file.

Using this method will provide the safest and most accurate scrape of your media collection.

If using VIDEO_TS or BDMV folder structure you must enable Recursive lookup when adding the source directory. (You will be reminded of this and the above setting in later pages.)

It is important to be aware that no scraper or folder and naming convention is 100% foolproof. There are just some cases where human intervention is required. A perfect example of this case is movies with the exact same name and year. See the following three movies as an example... 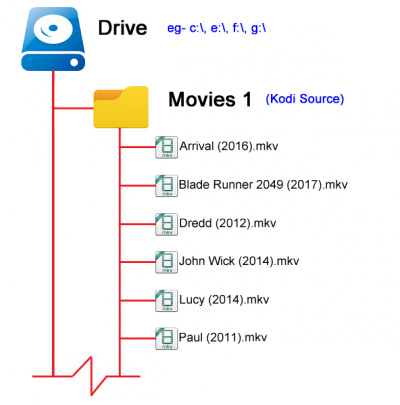 An alternate method of storing your movies is to save all the movie files inside the Source folder and omit the Movie folder. Also known as a flat folder structure. See image to right for examples.

Movie Filename must contain the Title and should contain the Year. Although not a strict requirement, the year should be in brackets. It should match the entry at the scraper site as shown in the above images.

There are disadvantages using this method:

It is not uncommon to have extra video files that are somehow related to the main movie. Clips such as bloopers, interviews with cast and crew, production methods, behind the scenes, etc.

Kodi will see all these additional video files saved inside the movie folder and attempt to scrape them, which will cause incorrect and unwanted multiple entries in the library. How Kodi actually treats these will depend upon which settings are enabled and which folder structure and naming convention is in use.

To safely store extra video files along with your movie, and have them accessible within Kodi, you will need to install the Extras add-on. Follow the instructions in the link below to create the correct folder structure. This add-on will only work with Movie Folders.

The remainder of this page deals with Special Use cases and can be safely ignored. Most libraries will not require implementing the following additional name extensions.

If you have a collection of DVD's and Bluray disks but do not want to rip them to a hard drive, then a Media Stub File allows you to add the collection of disks to the Kodi Video Library. It is a simple text based file that is added to your Source in exactly the same way as any other Movie or TV Show, which is then scanned or scraped into the library.

Media flags are icons in Kodi that displays the meta-information from the media file of a movie, TV show or music title. They are skin specific, and what works in one skin, may not work in another skin. It is always best to check with the skin sub-forum which flags and tags are used.

It is important to note that the skin will display these flags even when these extensions are not used. The only difference being that without the extensions, the movie must be played first in order for Kodi to read the audio and video codec data.

The actual audio and video codec data will override any extension used. This means that if you set the extension of, say, .ATMOS but the video file only has a stereo track, then the .ATMOS flag will be removed.

Example- note that movie folders are used, and the folder is simply named while the filename has been modified with extensions.

Some 3D movies might need an additional file name extension to be identified by Kodi as a 3D movie. See 3D for details on that additional extension, and when it is needed.

Also known as File Stacking, allows you to combine multiple movie files so they appear and play as the one movie. No longer a common requirement, but still available in Kodi should it be needed.

An example of this use is the Special Extended DVD Edition of The Lord of the Rings- The Fellowship of the Ring. Due to the length of the movie, the movie was split and released on two DVD's requiring a DVD change half way through the movie. This means that when storing this movie, the rip creates two separate movie files. When watching the movie, there will be an interruption when the first part ends and the second part needs to be selected to play.

Two options to overcome this issue:

To use this function the following steps are required:

The default expressions will NOT stack files which use only a number without the extensions stated below (eg movie1.avi, movie2.avi). This is intentional due to false positives which can occur with sequels, eg Die Hard 1, Die Hard 2, Die Hard 3, etc.

These are for multi-part video files in the same Movie folder. eg *.mkv, *.mp4, *.avi etc

The following are default stacking extensions that can be added to file names. 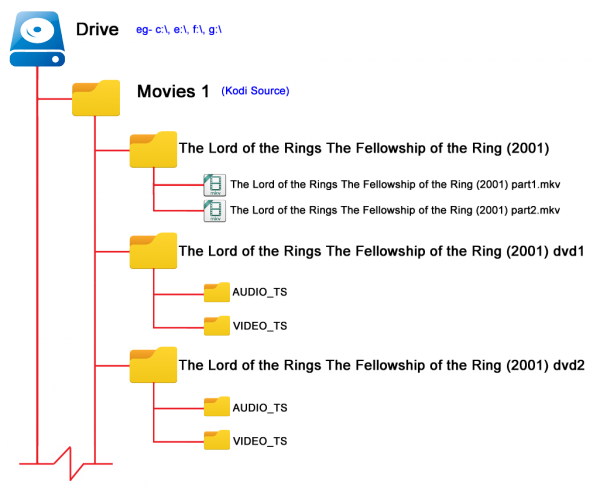 If you have preserved the DVD or Bluray folder structure, then use this method for folder stacking.

File stacking can be fine-tuned by the user to match obscure cases using the <moviestacking> and <folderstacking> advancedsettings.xml settings.