Difference between revisions of "Music tagging"

This page, Music File and Tagging, provides the following information:

The Music section of Kodi has many differences to the Video section of Kodi. It is important that you read this section to ensure your music and artwork are correctly scraped and displayed.

Although Kodi ignores the folder structure and the names of the folders and files, the structure of your folders is important as it affects the operation of other functions such as Import/Export, nfo files and Artwork. For example, if you have all your music files in one folder (which is possible), then you lose the ability to use local nfo files, local artwork, and the import/export module will not function correctly.

For this reason, Kodi recommends the use of the following structure.

Remember that Kodi does not extract any information from the filename. The only purpose the file name serves is to provide Kodi a unique id to locate the file.

The name you use for your files is your choice, but it is important that they are:

If you would like to use track numbers in the file name, then ensure you include the disc number, even if there is only one disc. eg

Folders are used as follows:

The following is a typical recommended structure:

A source folder contains your media collection- in this case Music. This folder is then set as a Source in Kodi which enables Kodi to access your Music. (remember, Kodi does not know where your media is until you tell it)

In the Video section of Kodi, you would set one, or more, sources for Movies, TV Shows, Music Videos, Home Movies etc. The Music section oparates along the same principle.

As an example, you would save your music folders into separate Sources for the following:

The idea is to group similar types of albums. This is not a requirement, and Kodi will still function if you grouped your music into a single source. It is a best practice guide which overcomes some hurdles with local files for compilation and collaboration type albums. These hurdles will no longer be an issue from v18 onwards.

Setting and Scanning of Sources is covered in detail in the next step of the guide.

Kodi has integrated Audio-CD (CDDA) ripping functionality. In order to use this feature, first configure the CD ripping settings (to set which encoder quality to use and where to store the files). To Rip the entire CD, highlight the Audio CD from the My Music root listing and choose Rip Audio CD from the context menu. To rip a single track, enter the Audio CD, highlight the desired track, and choose Rip Audio Track from the context menu.

There is no requirement to use this native Kodi CD Ripper. If you are comfortable using other ripping software, then we recommend you continue using that software. It makes no difference to Kodi which software was used.

Ever wonder how your music player always knows the name of the song, album, artist and track number of the music you play? This information comes from metadata embedded in the music file. If you purchased your music from an online store, then that store would have embedded the metadata in the file. If you ripped your own music, then the ripping software would have embedded the data into the file, probably without you even knowing. It is not uncommon that only minimal metadata is embedded, but this works very well on simple music players and is a convenient solution to sorting your library on these players.

Kodi also makes use of this embedded metadata. Kodi, being an advanced and feature rich player, requires a greater precision in the embedded tags. Any slight variance in, for example, the Album name between the tracks from the same album will see multiple entries in the library for that Album. Same with Artists. It is not uncommon to have a single album split into three similarly named albums. It is for this reason that there is a separation of the Scanning and Scraping processes for Music. The initial scan allows you to find and correct errors in tagging, before scraping. Failing to do that will create an unmanageable library.

Example of errors in tagging, which will cause duplicated entries in the library...

The easiest method to comprehensively tag your music files is with MusicBrainz Picard.

As Kodi scans your music collection, it copies the data contained in those tags into the Kodi music database. The benefits of this are:

Kodi has strong support for MusicBrainz tagging. It is highly recommended that users tag their music files using MusicBrainz picard.

MusicBrainz is an open source music encyclopedia that collects music metadata and makes it available to the public. MusicBrainz has a database that, as of Sept 2017, consists of over 1,258,860 Artists, over 1,866,600 albums and over 17,846,800 recordings.

Below is a screenshot of the main screen of the Picard software. A brief description of the layout as follows.

It is important to note that a lot of music is distributed with only the basic metadata embedded, as can be clearly seen in the screenshot below. (Original Value column)

The example in the image below shows the following:

Although Kodi will populate the library with those minimal tags, the errors in those tags would create havoc in the library.

Further information and guides can be found at the MusicBrainz Picard site. 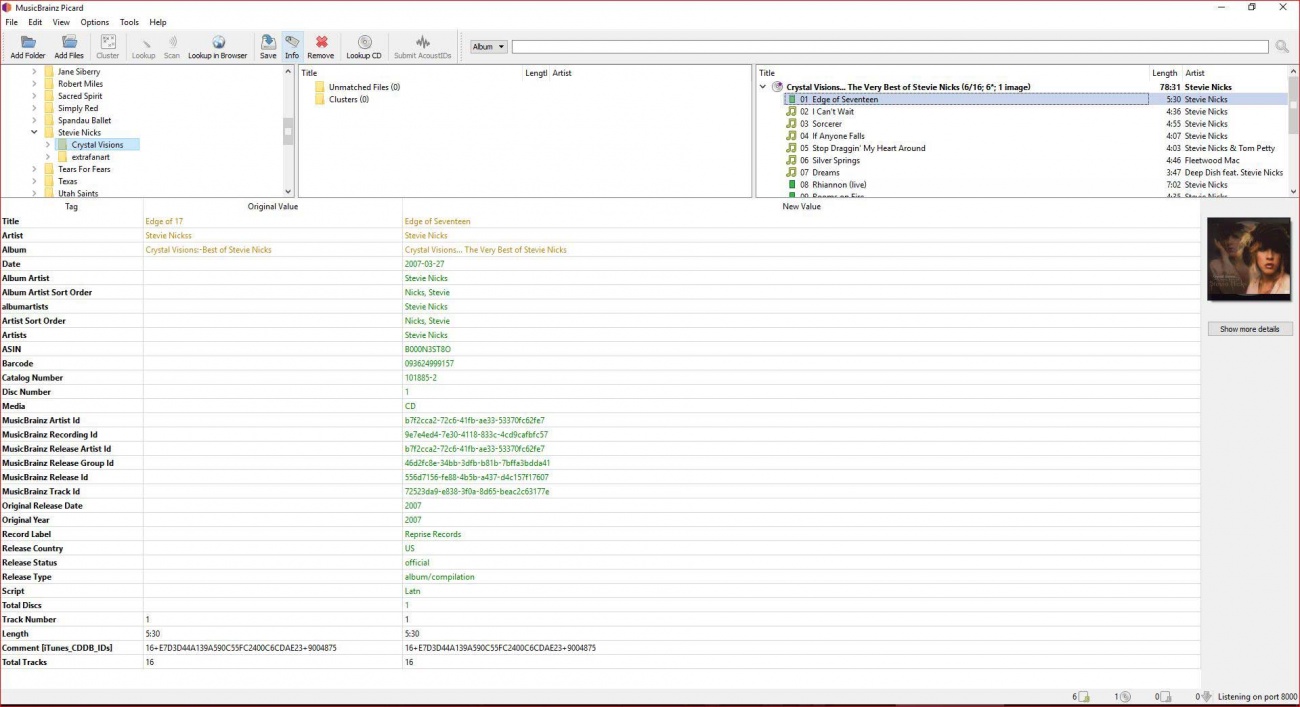 Although Picard is very easy to use, you must avoid blindly accepting everything offered by the software. It is important that you confirm the correct album was located. Due to the global nature of the database, there are many releases for a single album. These releases differ between countries, usually due to copyright requirements. This may lead you to inadvertendly select the incorrect release for your album, even though it is named exactly the same. The differences between releases may be as simple as different song ordering or the inclusion of additional bonus tracks.

Once the music files are tagged, it is important to avoid modifying the MusicBrainz tags unless you clearly understand the relationship of the MBID's and the other related tags. For example, embedding MBID tags, but then editing the Artist tag or Album Artist tag will result in incorrect entries in the library.

Cue Sheets are used to provide index and playlist information for a large audio file. They are generally used in conjunction with either extracting from, or burning to, Music AudioCD. Cue sheets have the file extension ".cue", and are simple plain text files.

Kodi does provide basic support for using cue sheets to define individual tracks when an entire CD has been ripped into a single music file. However the information provided by the cue sheet standard is much more limited than that of standard tagging, hence to enjoy the full music library features it is recommended that tracks are ripped into separate files and fully tagged.
If you do not use Cue Sheets you can safely move onto the next step.

For many categories, such as genres and artists, Kodi supports multiple values in the one field. By default it uses the character sequence " / " to divide the entry into multiple values. This divider may be changed via advancedsettings.xml.

Kodi reads the Album Artist tag in ID3, Ogg, APE and MP4 tags and uses it if available to assign an artist to the album (independently of the track's artist information). This is the "Album Artist" tag (in ID3 this is represented by the "TPE2" tag; in vorbiscomment (ogg) files "ALBUMARTIST", "ALBUM ARTIST" and "ENSEMBLE" are all supported). Multiple artists for either a track or album artist can be specified in "Artist1 / Artist2 / Artist3" format.

If no Album Artist tag exists, Kodi will use the first (primary) artist from the tracks as the Album Artist. Essentially we do a string comparison of all the track artists, and assign the common artists as the Album artist. This is generally the TPE1 tag in ID3.

As many users don't yet use the Album Artist tag, Kodi has an additional filter system for identifying compilation albums, where each track normally has a different artist. As Kodi scans a folder, it does the following:

Ratings in ID3 tags are read via the POPM field, and (if this doesn't exist) in a custom (TXXX) field named "RATING". For the RATING field, we accept 1-5 as valid ratings. For the POPM field things are more complicated, as there is no established standard in place. We currently most closely respect what Mediamonkey does, and also have some support for what Windows Media Player 11 does. The POPM tag takes a value from 0..255, with 0 meaning no rating, 1 the worst, and 255 the best. We currently map these as follows:

Although the list of playable formats is quite comprehensive, it is not accurate to say that every Kodi installation will play every format. The ability to play some of the more obscure formats will depend upon the version of Kodi and the operating system in use. Some formats will require the installation of add-ons.

It is possible to add or remove extensions for Music, using the following XML tags. Useful if you keep, say, FLAC and mp3 versions of music in the same folder. The <remove> tag can be used to remove mp3 from being listed in the library, leaving only the higher quality FLAC being displayed.

The following metadata containers are supported by Kodi

You will notice that not all the tags listed in the section Supported Audio Formats above are listed in the following table. Those formats that are ommitted do not have provision to support embedded tags. If your collection contains any of these unsupported formats, you will be unable to scan the music into the library. Your options are:

Kodi will scan the following tags embedded in the music file. The column Kodi Version indicates the version of Kodi that the tag was introduced, and will work in subsequent versions.