Music nodes are defined views that are used to organize your media from the music menu. In the past Kodi has had a number of standard nodes such as Artist, Album, Tracks that were hard coded. As of v15 Isengard, Kodi introduces the ability to customize these nodes using an XML file. Using XML files really gives great flexibility in how you display your media and lets you browse large collections quickly. Don't want your country music in your main album node... exclude it. Want a genre in a separate node, create it. Don't like how Top 100 Played is presented, change it.

To get full functionality from custom nodes, you need to use a skin that allows you to deploy them as you would like (e.g. latest builds of Aeon Nox). Confluence will show your nodes, but doesn't allow you to decide exactly where.

Users can now create and edit audio nodes from within Kodi thanks to the add-on Library Node Editor. 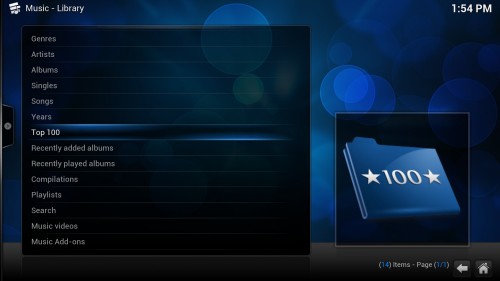 You can find a copy of the default nodes in one of two ways. One is to download all or some of the nodes you want form https://github.com/xbmc/xbmc/tree/master/system/library .

The other way is to copy the Kodi system default nodes that come with Kodi, shown in the table below:

To understand nodes a little better, lets take a look at one of the defaults. As an example take a quick look at the system/library/music/genres.xml node in its simplest form:

As you can see we are using standard XML format here so nothing too complicated.

Order = This is the order that you want to show the nodes. Starts at 1 for the top and goes sequentially so 2 will be the next node down.

Label = This is the text that will show for the node. In this case it is pointing to an ID in the strings.po file (for translation purposes) It can also just be any String you want, just type some text instead of the id number.

Path = This can be any valid Kodi path, such as a file path. This includes internal Kodi DB paths, such as musicdb://recentlyaddedalbums. For more on internal paths, see Opening Windows and Dialogs.

Icon = Pretty self explanatory really, this is the icon that will show when the node is navigated over.

So, in the case of Windows, copy the 'music' folder from C:\Program Files (x86)\XBMC\system\library to %appdata%\XBMC\userdata\library.

Having copied the node structure, we can now create a new xml file under the relevant directory.

In a vanilla install with the confluence skin, custom nodes in /music will appear in the sub-list of the Music main menu item.

For now, we're going to place our node under

As you can see as well as changing the order, we have a few more xml tags this time:

Type = Can be folder or filter, folder requires path to be set.

Match = Specifies how many rules should match. In this case we are matching all rules. 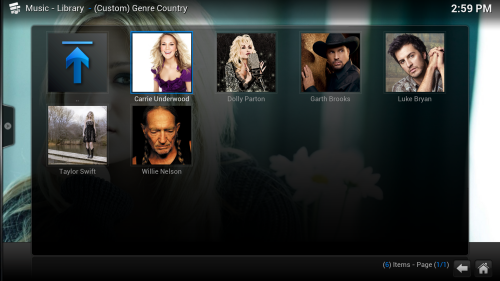 So there you have it, a simple genre filter for country music.

There are many other rules you can apply, a simple way to find them is to have a go with the smart playlist editor and copy the rule from the resulting xml playlist. There are many possibilities, you could create a rule for any of the database fields such as genre or year, use paths or combine rules together.

A more advanced idea would be a node structure so you could browse your albums by the first letter like this: 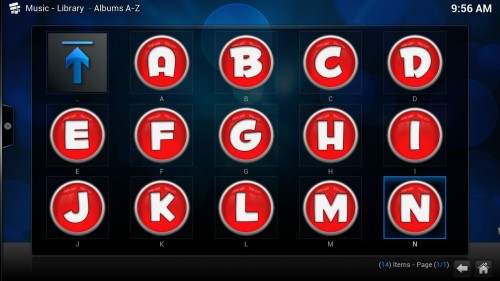