At the inaugural SourceForge Community Choice Awards in 2006, Kodi (then XBMC) was nominated in two categories, Best Project for Multimedia and Best Project for Gamers...and won both awards! Our deepest thanks goes out to all the Kodi fans who showed their support by voting and helped grace the project with its first major accolades.

The following year in 2007, the XBMC project appeared to have made the most of the favorable publicity that had accompanied its success at the 2006 SCCAs, for when the nominations were announced for the 2007 Awards, they were a finalist in no less than six categories!

Unfortunately, competing in so many categories appeared to make it difficult to achieve a critical mass of support in any of them, and ultimately Kodi did not win any awards that year. 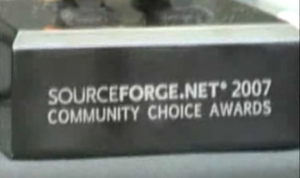 In 2008, Kodi once again garnered more nominations than it had the previous year, this time finding themselves eligible in fully seven categories! When the votes were tallied, Kodi took home the 2008 SCCA in the Best Project for Gamers category.