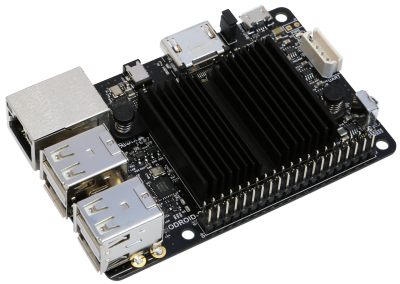 ODROID is a series of powerful ARM-based single-board computers (developer boards), manufactured by Hardkernel Co., Ltd., an open-source hardware company located in South Korea, capable of running Android or Linux. Kodi was easly on first ported for use on Hardkernel ODROID-X, X2, U2, U3, XU, XU2, XU3 and XU3 Lite. And later Kodi has also been ported to the ODROID-C series, and today ODROID-C/C+ and ODROID-C2 supports Full 1080p (Full HD) video playback of the most commonly used codecs, including support for most if not all Kodi add-ons, as well as offering very good GUI performance.

The ODROID series was at first primary designed to act as a development platform for developers wanting to prototype embedded systems based on Samsung Exynos 3, 4, and 5 series of System-on-Chips (SoC), but have since also been made popular for multi-purpose use by low-power device enthusiasts and hobbyist alike, including those using it for as HTPC (Home Theater PC) for Kodi. And today the ODROID-C series are based on Amlogic SoCs which are primarly designed to be used in media players.

Even though the product name ‘ODROID’ is a portmanteau of ‘open’ + ‘Android’, the hardware isn't actually fully open source because some parts of the design are still retained proprietary by the Hardkernel company or by ARM itself, such as the graphics drivers. As a home media center this line of boards offers a very cheap HTPC clients that as a media player in many cases works better than similar devices like the Raspberry Pi series.

The best option for Kodi is to use the LibreELEC distribution made by user wrxtasy at the Hardkernel Forums. However the official Ubuntu image from HardKernel also includes a modified version of Kodi (though often outdated and can not be easily updated).

The Odroid C1, C1+, and C2 from Hardkernel's C series are very low cost (around $35 to $ 45 USD as of early 2017) and very good performance as a HTPC clients. Having a C1/C1+/C2 installed with LibreELEC is very simple to setup and works exceptionally well. The C1/C1+/C2 handles most skins without lag. There are however a few heavier skins like Aeon MQ* that will lag a little bit, but not what would be considered beyond acceptable for everyday use. Video performance is great. Odroid-C1 and C1+ can playback 1080p / Full HD Blu-ray Disc (H.264) rips @ 30 FPS plays very fluid even if streamed over WiFi with good signal. And the newer Odroid-C2 which is also capable of playing back videos encoded with the HEVC (H.265) at up to 2160p / Ultra HD @ 30 FPS, and as such outperforming all current versions from Raspberry Pi.

Installation is pretty simple for the LibreELEC Builds, (installing done from a Windows computer):