MythTV is a digital video recorder for watching and recording television. MythTV also contains plugins for viewing other home media, similar to what XBMC Media Center provides. MythTV is like a free open source alternative to Tivo and Windows Media Center.

Some of MythTV's features include:

Integrated MythTV support in XBMC is based on the PVR support that has now been merged in mainline XBMC (as of October 2012). More information can be found on PVR wiki page. There is a currently a MythTV client add-on along with support of other PVR backends through client add-ons for those backends.

That said, the current support allows you to:

This limited source support is limited to playback of MythTV recordings. You need to schedule recordings via the new MythTV add-on or using mythfrontend or mythweb.

The functionality described on this page is for the 9.11 Camelot release of XBMC.

XBMC communicates with mythbackend using the Myth Protocol and MySQL database queries to the mythconverg database. This requires that the MythTV configuration is checked to ensure XBMC will be able to communicate with MythTV, which depends on whether XBMC is running on the same machine.

If you don't intend on using the Guide then the MySQL related configuration can be omitted. Access to the mythconverg MySQL database is only used to view the Guide.

If XBMC Media Center and the MythTV backend will NOT be running on the same machine:

To ensure XBMC has proper access to the MythTV mysql database, run the following commands on the mysql server. Replace PASSWORD or xbmc with whatever you prefer, but keep the single quotes for syntax.

mysql> grant SELECT,INSERT,UPDATE,DELETE,CREATE,DROP on mythconverg.* to 'xbmc' identified by 'PASSWORD';

To communicate with a MythTV backend, add a new Source from the Videos section. The source should have a URL that looks like: myth://username:[email protected] This URL needs to be specified manually as many skins don't support the ability to configure a MythTV source.

i.p.address is the IP address of the MythTV master server. A hostname can also be used, but it must be resolvable to an IP address on the XBMC Media Center machine.

When you select the newly added MythTV media source five folders will be listed: 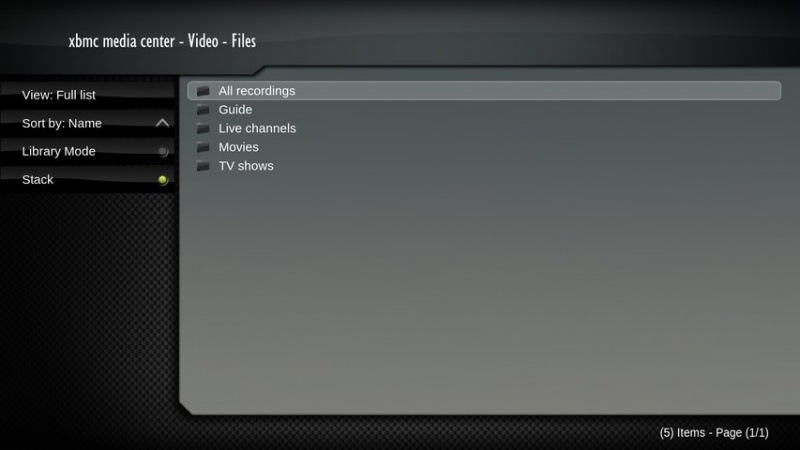 After choosing All Recordings a list of all recorded programs is presented. Standard XBMC functionality can be used to sort by date to see the most recent recordings, or sort by name to get all the shows from a given series grouped together. 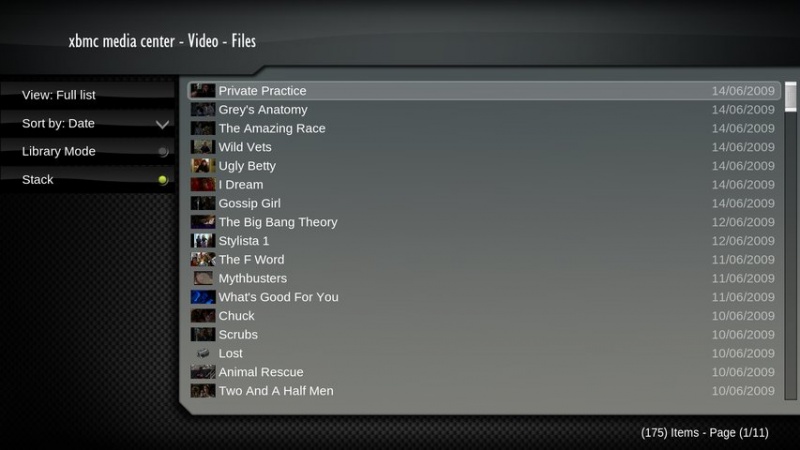 After choosing Movies a list of all the recorded movies is shown. 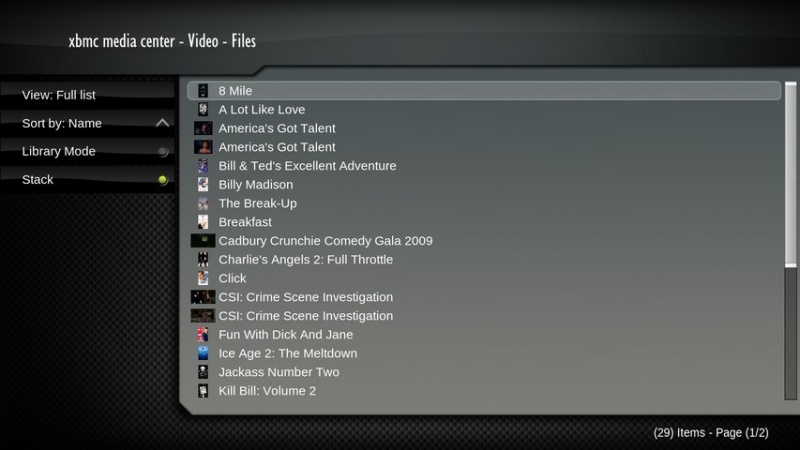 If not all of the movies are shown, e.g. some still display in the TV Shows section, the Electronic Program Guide (EPG) being used by MythTV might not be very accurate. The EPG describes which programs are Movies and which are TV Shows. Use the <myth><movielength> advanced setting (Setting removed in v16) to help with this problem. 85 minutes seems to work well.

After choosing TV Shows a list of all the recorded TV shows grouped by title is shown. This makes it easy to see what TV series or one-off programs have been recorded.

After choosing a title, the list of recorded programs with that title is shown.

After choosing Live Channels a listing of the channels used by MythTV is displayed. 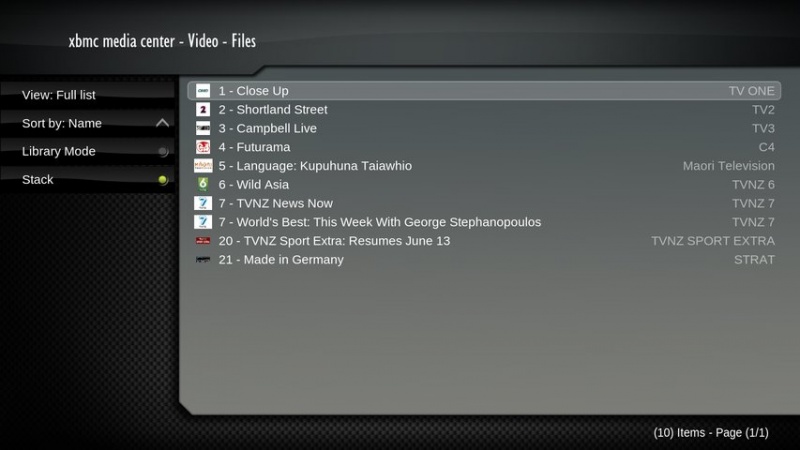 When a channel is chosen, the currently playing TV show on that channel is shown.

It is possible to pause Live TV, but it is not possible to skip. To move up or down a channel when playing Live TV press the PageUp or PageDown button. Note that channel changes can take some time depending on the tuner hardware and configuration being used by MythTV.

After choosing Guide a listing of channels used by MythTV is shown. 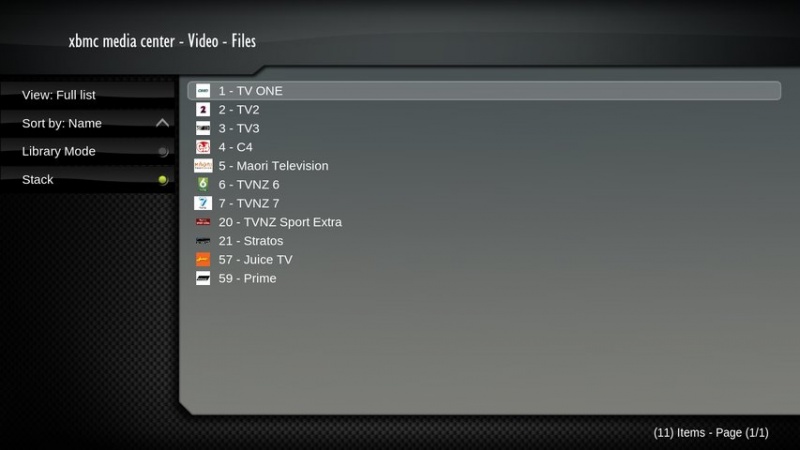 When a channel is chosen, the listing of upcoming programs on that channel is displayed. 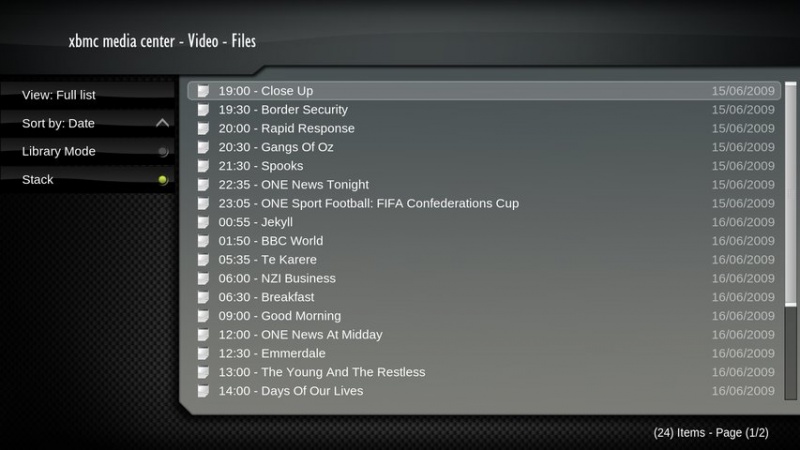 There is a future project to be able to schedule programs to record from the EPG similar to the functionality available in the MythTV frontend.

Recorded movies can be added to the XBMC Video Library by setting the Content Type on the Movies directory and then choosing the appropriate Movie scraper.

Once the recorded Movies have been scanned to the Library, you can see and play them via the XBMC Movie Library.

NOTE: be sure to only set the content type for the Movies folder. XBMC doesn't understand how to add anything other than movies. If you choose a folder containing recorded TV Shows to be added to the library you may end up with all sorts of strange files in your XBMC library.

Commercial breaks that have been flagged in MythTV are automatically skipped as of the 9.11 release (note that the option to turn EDL support on/off has now been removed). Prior to 9.11, automatic commercial skipping can be enabled by turning on Edit Decision List (EDL) support in XBMC Media Center through Settings -> Video -> Player -> Enable edit decision lists.

For more information about the configuration that is possible for commercial skipping, see the Edit Decision Lists wiki page.

The ability to delete recorded programs can be enabled through Settings -> Appearance -> View Options -> Allow file renaming and deletion.

If a hostname was used in the IP Address configuration for the MythTV Local Backend, either the DNS server on the network needs to be able to resolve the hostname to an IP address, or a static hostname to IP address entry is needed on the XBMC machine. A static IP address mapping can be set in the /etc/hosts file in Linux or Mac OSX, or in the AdvancedSettings.xml file for the original XBox.

Even if you haven't used a hostname, it may be worth adding an /etc/hosts file entry, as it appears that the backend returns a hostname anyway sometimes (see [1]).

If a username and password have not been supplied in the myth:// URL then the default of 'mythtv' will be used for both.

The libcmyth library used for to connect to MythTV from XBMC only enumerates the first 16 tuner devices when looking for available tuners. Trac - CMyth only enumerates 17 tuners

Depending on what was done when the MythTV backend was set up, it's possible that some Tuner ID's are > 17 in the mythconverg database (especially if tuners were added and deleted several times, or if multiplexing is being used for digital terrestrial tuners).

If this is the case, you may be able to see the Guide and all the stations displayed in XBMC, but XBMC may not be able to select a tuner for live TV playback.

This can be resolved by removing all the tuners through mythtv-setup (so they start at 0 when re-added), and then re-adding them, or reducing the number of multiplexed virtual tuners that are created for each physical digital terrestrial tuner.

If a only a green screen displayed but the audio is working fine. Use mythtv's frontend to change the encoder to mpeg4. The settings can be found in "Utilites/Setup- Setup - TV Settings - Recording Profiles - Software Encoders. Select Live TV, and change it's encoder from rtjpeg to mpeg4.

If CPU utilization is close to 100% on any of the CPU cores then there could be audio sync problems.

Depending on the video card and driver being used, there could be significant CPU utilized when playing H264 video content. The <skiploopfilter> advanced setting can be used to reduce the CPU utilization by reducing the quality of the output H264 video. Try setting it to 48.

4 History of MythTV support in XBMC

MythTV support in XBMC has been available since ~2004. It started life as a Python script for the original XBox that had functionality added by willing developers over the following years. Eventually the script moved to the current home at Sourceforge, and is now called xbmcmythtv. In late 2008 another script based solution arrived called MythBox.

In 2007 support for communicating with the MythTV backend was added directly to XBMC via a Source using the myth:// protocol. This project uses the cmyth library, which was built to use the network based Myth Protocol supported by MythTV.

In early 2011 the initial work from the GSoC for the unified PVR API was folded into a branch of xbmc, which was eventually pushed back to mainline XBMC in October 2012 and is scheduled to be released in Frodo/12.x: see PVR. This support will include a MythTV client.

The myth:// source was released in early 2007. This project uses the network based Myth Protocol to communicate with the MythTV backend. It also accesses the MySQL database directly to get Guide information.

Although the myth:// source doesn't support all the functionality that the xbmcmythtv script supported, it is possible to play recordings, which is all many XBMC frontend systems need to support.

The native MythTV frontend client needs to be used to schedule recordings.

MythBox was released in late 2008 and is a XBMC script for MythTV that supports the most common frontend use cases:

Myth2XBMC heavily based on the original xbmcmythtv script and is only tested on the Xbox.

Support for MythTV in XBMC started with this xbmcmythtv python script for XBMC on the Xbox. This project communicated with the MythTV mythconverg MySQL database to get information, and played recordings via a Samba share on the MythTV backend.

The last official release of the Python script was in May 2007 and supported version 0.20 of MythTV and protocol 34. Various unofficial releases were made available by some of the developers of xbmcmythtv, but appears to no longer be supported on an ongoing basis.

MythicalLibrarian and MythSExx are bash scripts which can be run on the MythTV server to create symlinks to the recorded files. The symlinks use the supported XBMC naming conventions so the standard filesystem scrapers can be used to scan recorded MythTV content into the XBMC Movie and TV Show libraries. They also generate the required EDL files to support commercial skip during playback.

MythicalLibrarian handles both TV episodes and Movies whereas MythSExx only handles TV episodes.