Difference between revisions of "Archive:UDOO" 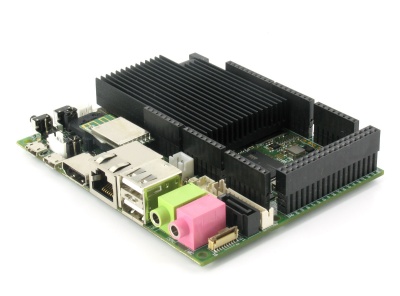 UDOO is a series of Freescale i.MX 6 single-board computers integrated with a Arduino 2 compatible microcontroller, primarily designed for the education of computer science, the world of makers and the Internet of Things.

UDOO is designed as a development platform that merges a Dual or Quad Core ARM Freescale]] Cortex-A9 i.MX 6 CPU, with optimal performances both on Linux and on Android operating system, and an Arduino 2 compatible board, embedded with a dedicated ARM Atmel SAM3X 8E CPU.

UDOO is a joint effort of Aidilab srl and SECO USA Inc, in collaboration with a multidisciplinary team of researchers with expertise in interaction design, embedded systems, sensor networks and cognitive science.

The easiest way to use Kodi on a UDOO board is to just install a Kodi-specific OS to your Micro SD card with one of the following OS's. The UDOO board will boot directly up into Kodi and nearly every setting can be easily configured within the Kodi GUI

Kodi can also be installed onto a UDOO board that is running Android using the normal Android instructions.