EzeeCube is an expandable smart media centre developed and sold by Ezee Systems Limited. It supports cross platform connectivity between iOS, Android, Mac and Windows devices. It stores photos and media content from up to 6 devices. All content can be accessed from the connected HDTV and any paired devices. EzeeCube comes with a customised version of Kodi pre-installed and pre-configured. Media content can be synced using the EzeeSync app for iOS/Android devices or Mac/Windows.

EzeeCube was crowdfunded via Indiegogo in June 2014, and reached 196% of its target. The campaign included the EzeeCube base unit, add-on storage, and an add-on blu-ray player. EzeeCube started shipping in June 2015.

EzeeCube comes with a 1TB or 2TB hard disk. It is expandable using the patent-pending Stack-To-Extend technology. EzeeCube also makes an add-on storage stack and a blu-ray player stack which can be purchased separately. Both these add-ons require no wires or setup.

It is an HDMI compliant device that connects to a HD television through the HDMI port. It can be controlled either by the IR remote control that comes with the EzeeCube base unit or any CEC remote control.

EzeeCube comes with Personal Video Recording (PVR) head-end pre-configured for watching and recording off the TV programming. It also supports hardware de-interlacing of the frames.

EzeeCube supports Gigabit Ethernet and can be connected to a home network via wifi or ethernet cable. iOS, Android, Mac or Windows devices on the same network can pair with EzeeCube to sync content from these devices automatically. EzeeCube can boot in USB mode to flash custom firmware via USB OTG port in the back. It also has an SD card reader, optical audio port for audio passthrough and a USB 2.0 port.

There are total of 6 pins exposed on the top and bottom of the base EzeeCube unit as well as stackable accessories. Stacks can be placed on top or below the base unit. Data and control transfer between the base unit and the stacks is via USB 2.0. A 12V5A power supply is provided on other pins. 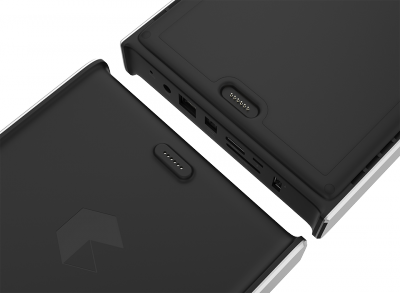 Customised Kodi - EzeeCube is based on Kodi’s official open source code and customised to automatically sync photos, videos and contacts from iOS/Android devices. It uses a new skin designed to work in 1080p.

OwnCloud server - EzeeCube comes with OwnCloud servers pre-installed and configured that stores media and documents files. They are accessible via OwnCloud cross platform client application, on your TV via Kodi or the EzeeSync app for iOS, Android, Mac and Windows.

FTP Server - EzeeCube comes with a FTP server pre-installed and configured which lets the user access and edit media content and files stored on EzeeCube. It works with all standard FTP client applications across platforms.

5 Comparison of EzeeCube With Other Platforms 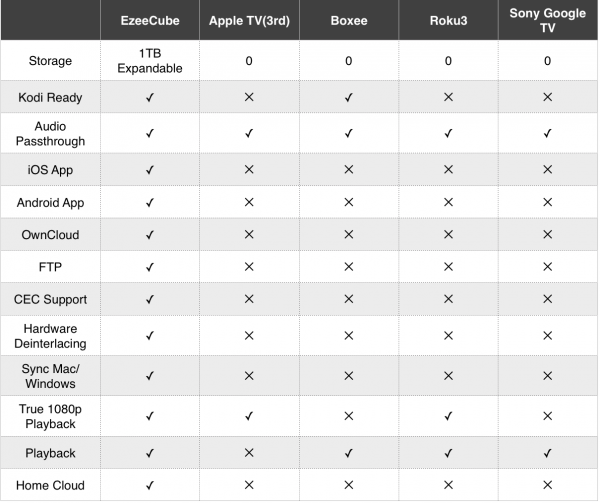