Difference between revisions of "User:Karellen/scratchpad"

Kodi has the option to both Export and Import its Video and Music database. These options can be used for a number of reasons including the following more popular ones.

When exporting, database objects are dumped to a nfo file which can then be used to import into the same or another Kodi database. The method used to import is dependant upon the export options used.

Various options are available to control what objects are exported or imported.

The option is accessed via the Settings menu as detailed in the first image.

Upon selection of the Export Library setting, you will be required to choose the Export method as depicted in the second image below. Continue reading for an explanation of the options.

This option will export the metadata stored in the database and save it into a nfo file alongside the movie file. This is a good example where Movies and TV Show episodes would benefit from being in their own directory.

After selecting Separate, you will then be asked if you would like to Export thumbnails and fanart?. This will export the Fanart, Posters, Banners and Episode Thumbs.

The next option is Export Actors Thumbs.

The Export will commence immediately once the final option is selected. An onscreen progress bar will indicate progress. 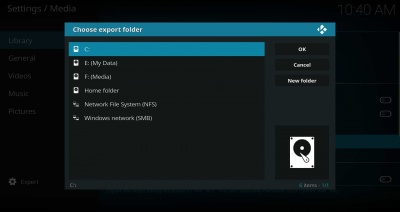 If you exported your library using the Export to Separate Files option, then you must use the normal scraping process to re-import the data. See also: Library_update

If you exported your library using the Export to Single File option, you will need to use this method to import the data as follows

Be aware that if you have removed movies or tv shows since the export, the metadata for those movies and tv shows will be re-imported into the library. You will need to run a Clean Library to remove them. This option is located just above the Export entry.

My Movies (www.mymovies.name) is an online database for profiling DVD-Video movies. My Movies saves an XML file and a poster cover image which with this patch will get scanned by Kodi in the same way as Kodi's own XML formatted NFO files are scanned/scraped.

Kodi has the ability to get the import movie library information from "My Movies" via the mymovies.xml files that it generates, these mymovies.xml are checked after the movie.nfo file.

By adding suitable code to advancedsettings.xml, you are able to further modify which data is exported. See also: Advanced_settings