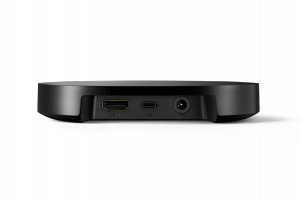 Nexus Player "Moorefield" chipset is powered by a 64-bit 1.8GHz quad-core Intel Atom "Anniedale" processor alongside the Imagination PowerVR Series 6 Graphics (2D/3D) Engine and 1GB of RAM supporting 1080p video streaming, and Intel claims that this chipset is capable of console-like graphics. The Nexus Player was unveiled on October 15, 2014 at Google I/O 2014 keynote , and made available for pre-order two days later for US$99.

Built by Asus in partnership with Google, the Nexus Player is Google's first Android TV device and is accompanied by a gamepad controller that will be sold separately for $39 and has been engineered for fine-tuned control of Android games. Nexus Player also comes with a voice-activated remote control by default. Both the default remote control and the optional official gamepad uses Bluetooth low energy, also known as Bluetooth LE, (marketed as "Bluetooth Smart" and first introduced in the Bluetooth Core Specification version 4.0 standard back in 2010).

With the Google Cast or Chromecast feature built-in, Nexus Player can also replace the functions of Chromecast dongle. Google for the Nexus Player's content has tied up with many partners such as Netflix, Hulu, Pandora, Bloomberg TV, Food Network, Vevo, tune in, Travel Channel, TED, and Plex among others, all optimizing their apps for big screen televisions to be used on the Android TV platform.

With the price point of the Google Nexus Player and its default features and content partnerships it pegs in direct competition to the Amazon Fire TV, which is also marketed as a media-streaming set-top box with gaming capabilities.

This page is a collection of links, information, tips, and guides related to installing and running Kodi on the Google Nexus Player.

Google Nexus is a line of consumer electronic devices that run the Android operating system. Google manages the design, development, marketing, and support of these devices, but some development and all manufacturing are carried out by partnering original equipment manufacturers (OEMs). The product family consists mostly of mobile devices—six smartphones and four tablet computers have been released to date. As of October 2014, the devices currently available in the line are the Nexus 5 smartphone (made with partner LG Electronics), Nexus 6 smartphone (made with Motorola Mobility), Nexus 9 tablet (made with HTC), and Nexus Player set-top box (made with Asus).

Devices in the Nexus line are considered Google's flagship Android products. They do not have manufacturer or wireless carrier modifications to Android (such as custom graphical user interfaces) and feature an unlockable bootloader to allow further development and end-user modification. Nexus devices are the first Android devices to receive updates to the operating system. The Galaxy Nexus is one of the few smartphones recommended by the Android Open Source Project for Android software development.