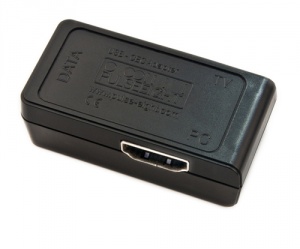 The Pulse-Eight USB to CEC adapter, for devices that don't have CEC connected to their internal HDMI pins.

CEC (Consumer Electronics Control) allows for control of devices over the HDMI port.

All modern televisions and AV-receivers support HDMI-CEC, which is a technology that allows devices to talk with each other over the HDMI cable. Kodi comes with libCEC (CEC abstraction and interface library from Pulse-Eight) which allows control of the Kodi input over the standard TV remote that comes with your TV. As buttons are pressed the remote command is sent via the HDMI cable to your Kodi device.

Using this feature a Kodi compatible CEC controller/adapter will send and receive remote key presses to and from your television and AV-receiver via libCEC.

CEC allows you to do things such as:

Consumer Electronics Control (CEC) is an HDMI feature designed to allow the user to command and control up-to 15 CEC-enabled devices, that are connected through HDMI,[63][64] by using only one of their remote controls (for example by controlling a television set, set-top box, and DVD player using only the remote control of the TV).[65] CEC also allows for individual CEC-enabled devices to command and control each other without user intervention.

It is a one-wire bidirectional serial bus that is based on the CENELEC standard AV.link protocol to perform remote control functions. CEC wiring is mandatory, although implementation of CEC in a product is optional. It was defined in HDMI Specification 1.0 and updated in HDMI 1.2, HDMI 1.2a and HDMI 1.3a (which added timer and audio commands to the bus). USB to CEC adapters exist that allow a computer to control CEC-enabled devices.

Kodi uses libCEC (CEC library) from Pulse-Eight for send and receive CEC commands over the HDMI bus, this is because libCEC acts an abstraction layer and translate the commands to match each vendor and devices compatibility issues.

libCEC is aimed at being a reference implementation of the HDMI 1.4b Specification, however what each adopter supports is not always what they should support. Equally some mandatory features of HDMI-CEC are not implemented by some vendors.

The following is a list of the most commonly used HDMI-CEC commands:

2 Settings in Kodi for CEC

Settings for your CEC devices can be found in: Kodi Input Settings

CEC uses the remote.xml keymap, editing that XML file will allow you to customize most buttons.

To identify button names, enable the debug log and look for OnKey messages. Unfortunately the key name reported is bogus and you will need to deduce it by searching for the reported action in the default remote.xml and noting the key that causes the action in the window showing when the message was logged.

There are different trade names for HDMI CEC, depending on who is the manufacturer of your device, so it doesn't have to be stated as HDMI-CEC. Find your manufacturer on this list and see what it is called for your device:

Most HDMI ports on computers (onboard or via GPU) do not have integrated support for the CEC feature, but instead can use a external CEC adapter, such as the ones from Pulse-Eight, and some more recent Intel motherboards come with a integrated HTPC header to allow you to connect an internal CEC-adapter.

Pulse-Eight makes two different formats of HDMI-CEC USB-adapters, one for external and one internal. The work the same, with both permitting a connected device to send and receive HDMI-CEC control commands on the HDMI bus. The Pulse-Eight CEC adapters can be installed for use with Kodi. Your television remote can then be used to control Kodi, and Kodi can control all compatible connected devices.

When "setting up" CEC make sure your configuration uses good HDMI cables. Especially cheap cables - still able to support 1080p without any problems - have been reported to cause problems with CEC (eg. devices like raspberry not showing up in the CEC menu at all, devices showing up but remote not working, etc).

There are also reports of devices with improper HDMI CEC implementation, such as ROKU streaming box, causing problems with CEC device recognition. Disconnecting non-CEC devices, or upgrading firmware on those devices, may resolve the problem.

7 Some Videos to demonstrate how it works

Simple but easy to understand: