To install the most recent stable version of Kodi for Windows, go to http://kodi.tv/download/849. This is the recommended version for most users.

The recommended version of Kodi is the current release Kodi v19.2 Matrix. This is the stable build and is recommended for general users.

WARNING: Pre-release builds should be considered unstable and might cause crashes and loss of data. These builds might include bugs and missing or broken features.

The Pre-release version is an early build of the next version of Kodi. The pre-release builds progress from Alpha to Beta to Release Candidate as they get closer to release.

Pre-release Builds are only for users who want to help improve Kodi by testing and providing feedback on any issues that are discovered.

WARNING: Development builds should be considered unstable and might cause crashes and loss of data. These builds might include experimental changes, bugs, and missing or broken features.

Kodi development builds, or ‘Nightlies’, are nightly snapshots of the current development version. These builds are earlier and more experimental than pre-releases.

Development builds are only for users who want to help improve Kodi by testing and providing feedback on any issues that are discovered. Complaints made on the forum about missing or broken features in development builds will be met with silence at best.

You can choose from several different ways to install Kodi.

An executable installer file (.exe) can be downloaded from the Kodi downloads page.

The following video guide shows you how to install Kodi with the executable installer.

Kodi can be downloaded from the Microsoft Store using the link on the downloads page.

If you have Chocolatey installed, you can run the command-line installer. Visit the Kodi Package page at Chocolately for instructions. 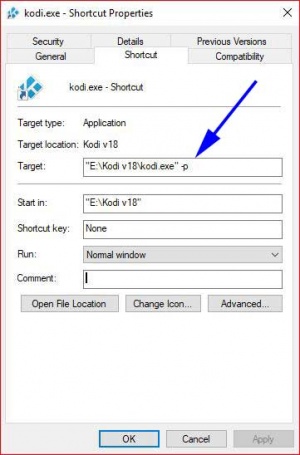 You can run Kodi in portable mode (Windows only). This gives you the flexibility to run more than one instance of the current version, or several different versions of Kodi – for example, to set up a basic installation for testing.

Complete all steps before running Kodi.

You can now run the portable version of Kodi by opening this shortcut.

The dedicated team of Kodi volunteers are always working to improve and enhance your Kodi experience. Several times a year, new stable versions of Kodi are released.

You can upgrade by installing the new version of Kodi by following the installation instructions above. You do not need to uninstall the old version.

See: Migration from XBMC to Kodi

If you are using a version of XBMC, you must follow the instructions in this guide to upgrade to the latest stable release of Kodi.

Ensure your hardware meets the minimum requirements before upgrading.

Older versions of Kodi 32-bit can be found here.

Kodi is installed in folders in two places. You must remove both folders to completely uninstall it.

The Kodi program is installed by default to C:\Program Files\Kodi\, or in C:\Program Files (x86)\Kodi\ if you upgraded from an older version. To uninstall the Kodi application in Windows 10:

To uninstall the Kodi application in Windows 7 or Windows 8:

After you install Kodi, all changes to Kodi are saved in a data folder. This includes things like your userdata, libraries, skins, and add-ons.

To completely uninstall Kodi, uninstall the application, then delete the data folder.

Windows Defender SmartScreen is a feature of Windows that blocks software it does not recognise to protect your computer.

If you download the installer immediately after a new version of Kodi is released, Windows Defender Smartscreen might block the installer.

If the Kodi installer is blocked, click ‘More info’ then ‘Run anyway’ to continue installing Kodi.

NOTE: Changing settings in Windows Security can make your computer less safe. If you are unsure whether to continue, consider installing Kodi through the Microsoft Store or waiting a few days until Windows Defender recognises the new version of Kodi.

To stop Windows Defender SmartScreen blocking the Kodi installer, turn off ‘Check apps and files’ in ‘App & browser control’ in Windows Security, then install Kodi. Remember to turn on 'Check apps and files' after installation is complete. 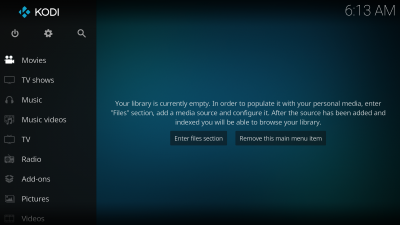 Open Kodi from the Start menu, by expanding the Kodi folder, then choosing the Kodi app. When you first run Kodi, you will be told that your library is empty. To start adding media to your Kodi library, see the Wiki section for first time users.