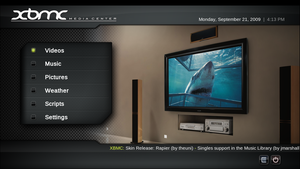 This difference in distance has a huge impact on the interface design compared to typical desktop computer interaction when the user is sitting at a desk with a computer monitor, and using a mouse and keyboard (or perhaps a joystick device for computer games) which is sometimes referred to as a "2-foot user interface". Ten-foot interfaces may resemble other post-WIMP systems graphically, due to a similar paucity of pixels, but do not assume the use of a touch screen.[11][12]