This is a (probably futile) attempt to keep up with the vast range of MCE remotes out there, and give some indication of how well they work with Kodi.

If you are adding a review please try to be as detailed as possible about the remote. For example:

The article groups the Microsoft compatible (also known as eHome or RC6) remotes together first, as these are most configurable when you're using them with Kodi. Other than this there's no significance to the order of the reviews.

The remotes in this section all use the Microsoft eHome driver on Windows. See Using a Microsoft remote control in Windows for details.

eHome remotes are generally more expensive than the non-eHome remotes, but they are highly configurable and work very well with Kodi. Many universal handsets, for example the Harmony remotes, have emulation for eHome/RC6 handsets built in so they will work with an eHome IR receiver.

Note that Microsoft has modified the programming and device specification for remote controls several times. For example, in Vista, the Port Driver/Class Driver Model was added. This means that there may be some transceivers which may not function fully, if at all, on systems prior to Vista. For the curious (or bored) there is a specification for the Windows Media Center remote. 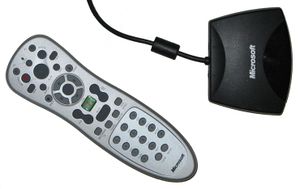 All these variants of the MS remote will work out of the box with Kodi Live, though with a standard Linux install you'll need to install and configure Lirc. To get it to work on Windows you need to configure it to simulate key-presses. See Using a Microsoft remote control in Windows for details. 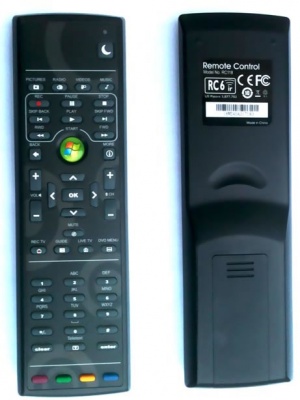 AIM, Ahead In Multimeadia is a registered trademark of Formosa21 Inc. This is a Microsoft Windows Media Center compatible remote control labeled (RC6) for Windows 7 32bit and 64bit as well. Model Number: RC118 other compatible models made by the same company are RC125 and RC126, which use the same hardware but with different button layout. The receiver Model number: IR605A

RC6 remotes is the best you can buy specially after Microsoft's own remote was discontinued; there are so many cheap/clone remotes but spending a few more bucks should leave you satisfied.

This Remote is fully comaptible with Microsofts eHome default Driver "Microsoft eHome Infrared Transceiver" no additional drivers required, it will be automatically detected and installed by Windows. It has a dedicated website that has all the required setup files available, the .reg file on site should work with any compatible RC6 MCE remote. by using the latest config.reg file all the buttons work in XBMC.

All buttons are capable of sending IR WM_APPCOMMANDS or Keystrokes, fully configurable. 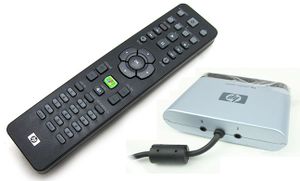 Both versions are compatible with the Microsoft remote, and the .reg files used to reconfigure the MS remote will also work with the HP remote.

With the Remote-XBMC.reg config all the buttons work in Kodi except for the "T" and "Print" buttons. To configure these buttons add the following to the .reg file:

This is a newer version of the HP remote. An important difference from the older HP remotes is that it has a unified Play/Pause button instead of separate Play and Pause buttons. Like the older remotes it uses the Microsoft eHome drive so the buttons can be configured by modifying the registry. The Play/Pause button is number 6E. To configure this to send a VK_MEDIA_PLAY_PAUSE multimedia keypress use:

There is also a version of this newer HP remote with red / green / yellow / blue buttons as the top row of four. On that (and I assume the one pictured) the button numbers for the replay button (top-middle) and the TV button (top-right) are 80 and 39 respectively. Hope that helps

If using this one or the newer HP remote such as:

in combination with OVU400102/71 HP usb IR receiver on a Ubuntu system, then the Play/Pause button will need a special code 0x00007b91 in the /usr/share/lirc/remotes/mceusb/lircd.conf.mceusb

Note that the HP IR USB receiver OVU400102/71 uses a Fintek chipset. There have been various problems reported with using this device on XP. In some cases, it is recognized as an eHome device, but then does not send keys as an HID device, (however it worked with the EventGhost MCE Remote plugin). In other cases, it was not recognized as a Microsoft eHome device (a patch from HP may be required), but as a FinTek eHome device (after getting the (hacked) Fintek driver). The FinTek driver does not work on some XP configurations (cause unknown).

HP IR Receiver TSGI-IR01 apparantly has several implementations. The TopSeed (vendor id 1784 Product 0006) implementation does NOT support USB3. Plug into a USB2 port, otherwise, you will get 'random' data whenever a keys is pressed, or worse (hangs, etc.). Note that on some systems even the USB2 port will not work. This may be due to newer chipsets or firmware (z97, ASRock). 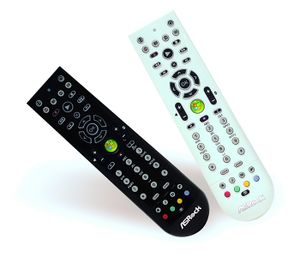 The Asrock ION PC's come with a remote control and some models the HT Also include a internal CIR receiver. 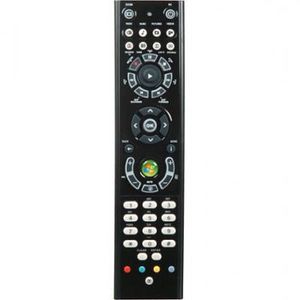 Compatible with the Microsoft remote, and the .reg files used to reconfigure the MS remote will also work with the Mediagate. The remote is currently available on Amazon UK and US.

There are some additional buttons not on the official MS remote. These can be configured using the following in the .reg file: 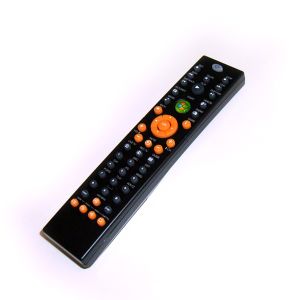 Compatible with the Microsoft remote, and the .reg files used to reconfigure the MS remote will also work with the Mediagate.

There are some additional buttons not on the official MS remote (and not on the GP-IR02BK): 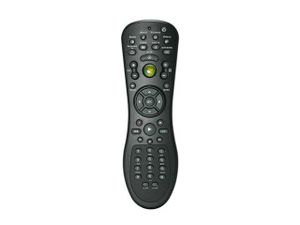 Compatible with the MS remote. Works out of the box with XBMCLive. Not tested (so far) with the Windows and OSX versions. Don't know if it's configurable with the registry.

Compatible with the MS remote. Frequently works out of the box with XBMCLive - some versions ship with new receivers whose product IDs are not always included with LIRC such as ID 0011 from VENDOR_TOPSEED. If the remote doesn't work and/or the light on the receiver stays on once a button is pushed, the reciever needs adding to LIRC. Instructions are here. Not tested (so far) with the Windows and OSX versions. Don't know if it's configurable with the registry. Currently available from Amazon UK (search for HA-IR01SV). Googling suggests it is widely available. 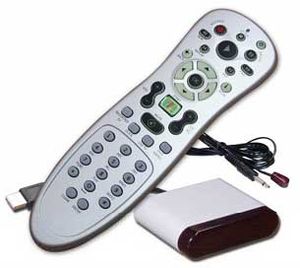 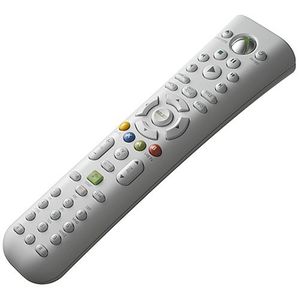 This will work on Windows (I've tested on XP and 7) with the Microsoft receiver or a compatible receiver like the HP (the remote does not come with a receiver) though need a minor registry tweak. Navigate to:

then change the value of CodeSetNum0 to 8, and delete the three entries CodeSetNum1, CodeSetNum2, CodeSetNum3. You need to reboot for the change to take effect.

There are some buttons that aren't on the standard MS remote. The button numbers for these are:

The volume and mute buttons do not work. 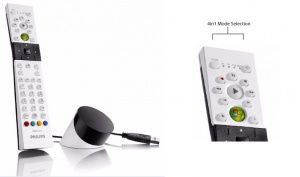 Philips have produced a family of remotes in this range designed for different sales regions each with different features. This one has the ability to control 4 devices (PC, TV, Sat, Amp) and can be programmed using the manufacturer codes database supplied. It also has the ability to learn functions from other remotes to replace any of its buttons, making it very versatile once customised to your home cinema setup. However, the keys are not backlit. The supplied infra-red usb receiver only works with Vista, Windows 7 and Linux.

Note: Also works with the Official Microsoft MCE receiver as it sends the same signals (RC-6), meaning it can be used on Windows XP via this receiver.

Discontinued - (Can be found on ebay UK)

Similar to the buttons to the Microsoft MCE remote, but with a full keyboard and a 'nipple' for moving the mouse. Range is limited and it requires a direct line of sight to the receiver. Can be operated on the users lap. The keyboard has a very nice feel, though the mouse nipple is hard to use.

Works with the Official Microsoft MCE receiver and with compatible RC6 receivers like the HP receiver.

These remotes usually work by emulating a keyboard, that is when you press a button on the remote Kodi receives a key press just as if a key had been pressed on the keyboard. Most of the remotes emulate multimedia keyboards or send Windows Media Center keyboard shortcuts like ctrl-shift-P for Play.

Kodi has all the required keyboard mappings for these remotes so they should work out of the box. However they usually cannot be configured so they have some limitations. For example, on Windows the green button will start Windows Media Center and this can't be changed without considerable messing around. 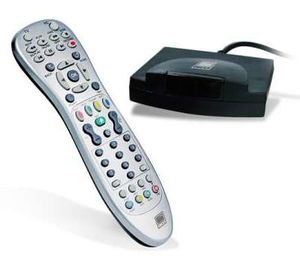 Cheap and cheerful remote. It simulates the MS Media Center keypresses and will work out of the box on Windows, Linux and probably OSX.

Apparently there are different usb receivers that come with the remote.

There are several extra buttons not on the standard MS remote. If you want to add mappings for these keys here are the entries you need in keyboard.xml. 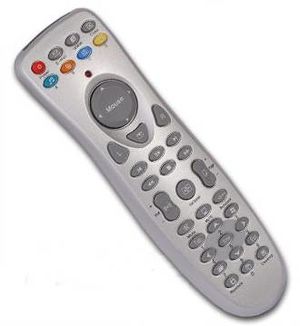 There is no manufacturer's name on this remote or the manual, and it is sold via numerous Asian resellers, but on the PCB of the receiver you can read the OEM name www.tigerfly.net. It can be used with Logitech Harmony Remote Software by picking Computer>>Media Center PC>>Chinavasion>>CVSB-983.

They are available on Ebay and DealExtreme for as little as ~$10 including shipping (often marketed as e g $2 for the device and $8 for shipping but since the cost for two is $20 this is just a trick). It's cheap and feels a bit flimsy, but it works well enough. It simulates the MS Media Center keypresses and will work out of the box on Windows, Linux and probably OSX. It also simulates a mouse including mouse buttons, although it's no match for a proper mouse or trackpad.

It isn't very configurable and certain buttons don't work as they should: The fast forward and rewind buttons skip forward or backwards instead of moving gradually. This is because they send a bunch of keypresses (ctrl, shift, arrow, letter "B" etc). If the software is set to detect ctrl + arrow (left or right) it probably works.

If you want to add mappings for the four coloured keys here are the entries you need in keyboard.xml. Every button can be mapped, with one possible exception (the red Power button).

Update 12th June 2011: I've bought one recently. They must have changed hardware or whatever because mine works well with XBMC out of the box both on Win7 and Linux Ubuntu. Most keys are functioning correctly and 4 colored keys can be mapped by adding the following entries in keymap.xml:

Update November 6, 2011: This remote works out of the box on a vanilla install of Ubuntu (11.1). It is auto-detected as a keyboard and mouse. It is no good for typing. It is only slightly better for moving the mouse pointer around the screen. The buttons are dependable though, and if you are looking for a cheap remote that does the job this should be a candidate. Here is a more complete map for every key on the remote except the Red Power Button. These changes go in your keyboard.xml file. Make sure that there are no duplicate mappings (with PVR settings). The default behavior is to pop up a notification with the key combination passed. You should probably replace this behavior with what you want.

And yes, sometimes between then and now, the command for color button changes. f1, f2, f3, and f4 becomes one, two, three, and four caused by keyboard.xml auto update from the repository.

Update December 28, 2013: This remote works out of the box with Openelec 3.1.x. No configuration is needed. Some additional info regarding the red power button of this remote:

The GoTView PC Remote control looks exactly like the "unbranded remote" above. It is also detected as MCE remote by lircd, but has slightly different keycodes, which are incompatible with xbmc defaults. To make things work correctly, add something like the following before the </keyboard> </global> lines in your /usr/local/share/xbmc/system/keymaps/keyboard.xml file