Professor Dr.Muhammad Masood Ahmad Naqshbandi Mujaddidi Was A Famous Scholar of AhlusSunnah .He is Also Known As Mahir-e-Razwiat for his tremendous work on Imam Ahmad Raza Khan.

When the pure light of Islamic literacy and knowledge shadowed by the darkness of so called self-constructed and personal oriented Islam----when the heart and soul of the Muslim Ummah became confused----He one of the most qualified, learned and spiritually strengthened personalities----acted like a guiding star and became the beacon for those who had the thirst to seek the classical knowledge of Islam and for those who wanted to follow the Sirat-i-Mustaqim (the straight path). He was highly respected for his excellent approach and efforts to remove the mask of misconception surrounding the true interpretation of Islam. He was the son of Mufti Shah Muhammad Mazhar Ullah Rahmatullah ‘Alayh, the great Mufti, Khatib and Saint (d. 1966 c. e) of Delhi (India).

Prof. Dr. Muhammad Mas‘ud Ahmed was born in Delhi in 1930 and acquired his education from his father Mufti Muhammad Mazhar Ullah Rahmatullah ‘Alayh and in Madrassa ‘Alia, Delhi and then Oriental College, Delhi. He migrated from India to Pakistan in 1948. Here in Pakistan he continued his education in different institutions and Colleges, Punjab University (Lahore) and Sindh University, Jamshoro (Hyderabad). Educational and academic career of Prof. Dr. Muhammad Mas‘ud Ahmed set an example for great achievements. He excelled in all his examinations of M.A. & M.Ed. at Sindh University and was awarded silver and gold medals. He then went on to compile his Ph.D. on the topic of "URDU MAIN QUR’ANI TARAJIM-O-TAFASIR" (Qur’anic translations and exegesis in Urdu) and was awarded the degree of Doctor of Philosophy from Sindh University, Jamshoro, Hyderabad (Pakistan) in 1971. Prof. Dr. Ghulam Mustafa Khan, who was the guide of Prof. Dr. Muhammad Mas‘ud Ahmed in his Ph.D. research work, writes:-

The Government of Pakistan bestowed upon him the "IZAZ-I-FAZILAT" award in 1992. He has also received awards from Imam Ahmed Raza Research Institute, Karachi in 1991 and from Pakistan Intellectual Forum in 1992. Prof. Dr. Muhammad Mas‘ud Ahmed worked as Lecturer, Professor, and Principal, paper setter, examiner and member of board of studies at Sindh University, Jamshoro; Khairpur University, Khairpur; Punjab University, Lahore etc. He also worked as a paper setter for the Public Service Commission (Sindh); and was also the Guide and Director of Ph.D. students at the University of Karachi and the Khairpur University, Khairpur (Sindh). He retired as Principal Govt. Degree College and Post-Graduate Studies Centre, Sukkur, Sindh (in Grade 20.) in 1992. Performance of Prof. Dr. Muhammad Mas‘ud Ahmed (as his ACRS shows) remained excellent throughout his service career.

As mentioned before, Prof. Dr. Muhammad Mas‘ud Ahmed enlightened the way of Sirat-i-Mustaqim, he satisfied the confused minds of the Muslim Ummah and it is not wrong to say as the Saint of Qadriyya order Dr. Ali Ahmed Qureshi declared in 1991:-

This religious status has been accorded by the following chain of ‘Ulema and Masha’ikh: -

The following books (a new International Series) of Prof. Dr. Muhammad Mas‘ud Ahmed are proof of his great achievements, especially for the Muslim youth of today: -

The respected Professor has also written on a diverse range of topics concerning Islamic ideology, some of his great works are: -

The eminent Professor and great Saint of the Naqshbandiyyah Order left this temporal abode on the 28th April, 2008 leaving behind a rich literary legacy. May ALLAHU TA‘ALA grant him a high station in Jannah (Aameen Suma Aameen).

Example without the {{clear}} template 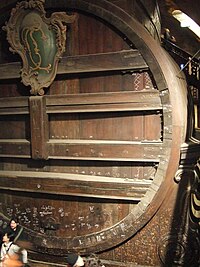 See how this section starts at the right of the image, with the line actually overlapping the image

Example with the {{clear}} template

See how this looks much better?