Difference between revisions of "Archive:HOW-TO:Install Kodibuntu from a USB drive"

This page explains procedures and methods to create a USB bootable drive or install XBMC into a USB flash drive. The instructions are written for XBMCbuntu, but may work for other installs with ISO images.

Warning Backup your data before proceeding. The instructions contained in this page will format drives and will destroy data contained in said drives.

The general procedure to install XBMCbuntu from a USB flash drive is:

XBMCbuntu can be installed from a USB flash drive, much like Ubuntu. This may be necessary for netbooks and other computers without CD drives, and is convenient for others. Also, configuration changes can be saved on the USB flash drive, unlike a CD-ROM drive.

Booting from a USB flash drive created with this utility will behave as if you had booted from the install CD. It will show the language selection and then the install menu, from which you can install XBMCbuntu onto the computer's hard drive or launch the Live USB environment.

XBMCbuntu can also be installed to a USB flash drive, though the life-span of the drive may be reduced slightly, due to the extra read/write cycles that XBMC requires. A tmpfs can be created to mitigate this though it is not covered by these instructions.

You can also install Ubuntu and then XBMC on top, but this guide is only about creating a bootable flash drive from an ISO. It's either-or, not both.

To create a USB installation disk, you will need:

Note: If you're installing XBMC on top of Ubuntu, use the Ubuntu ISO instead of the XBMCbuntu ISO. The ISO-to-flash drive process is similar for both XBCMbuntu.iso and Ubuntu.iso -- see next line 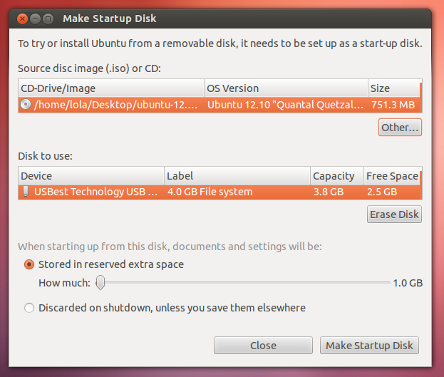 Be aware existent data contained in the usb flash drive will be lost.

Note: NEVER use one of your hard drive partitions in this process unless you really know what you are doing, as data will get erased. 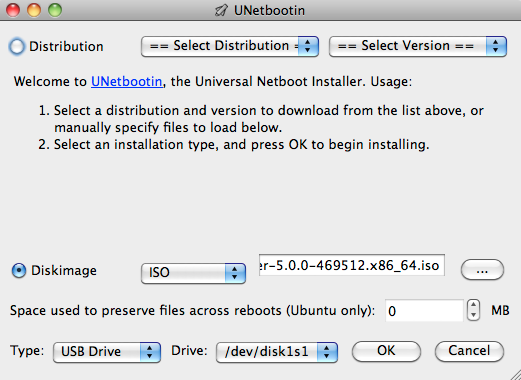 UNetbootin for Mac OS X can be used to automate the process of extracting the ISO file to USB, and making the USB drive bootable. The resulting USB drive, however, can be booted on PCs only. If attempting to make a USB drive that can be booted from a Mac, or if UNetbootin does not successfully create a bootable drive, follow the instructions below.

If you would prefer to use a USB bootable in Mac, please follow the instructions below.

Note: This procedure requires an .img file that you will be required to create from the .iso file you download.

Tip: Drag and Drop a file from Finder to Terminal to 'paste' the full path without typing and risking type errors.

again and determine the device node assigned to your flash media (e.g. /dev/disk2)

(replace N with the disk number from the last command; in the previous example, N would be 2)

(replace /path/to/downloaded.img with the path where the image file is located; for example, ./XBMCbuntu.img or ./XBMCbuntu.dmg).

and remove your flash media when the command completes

Please notice: While all of the info and above commands are executed properly on a MacBook Air 3,2 (that is the 2010 version 13" version of the Air) the end result will not produce a bootable USB device, at least not with the image for Ubuntu 10.10 64-bit. When booting of the USB device the following message or something similar will appear: "Missing operating system" and the process is auto-magically halted.

To get the USB device (e.g. a USB stick) to show up at all in the boot menu you also may have to reboot/turn on/off the computer a couple of times and also resync the partition tables using rEFIt. After doing this the USB should then appear as a bootable device while holding in the alt or c key when you are rebooting the computer. Notice that both the computers built in bootloader and rEFIt will identify the USB device as a Windows device, but that's not a problem and expected.

A workaround to the-usb-device-is-not-booting-problem is to:

Alternatively, burning a CD and installing via an external CD-drive will work fine on the Macbook Air 3,2. 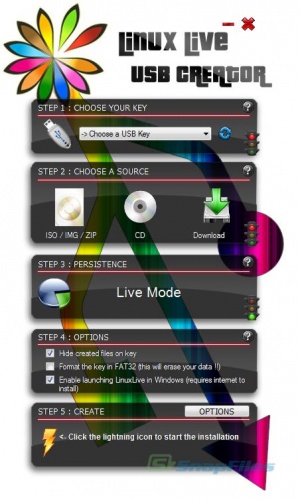 Creating a XBMCbuntu or Ubuntu USB disk is easy, including Live mode.

Download and use Linux Live USB Creator aka LiLi.

Steps 1, 2, and 3 are mandatory, and each has a traffic light to indicate its state:

Note: Instead of usb-creator.exe you can use Unetbootin to create a bootable USB flash drive. http://unetbootin.sourceforge.net/ You won't be able to select the USB flash drive if it wasn't formatted in a way that Windows can see it. You may have to format it using Windows Explorer in order for it to show up in a creator tool.

5 Booting the Computer from USB

In order to install a fully working XBMCbuntu operating system on your USB flash drive make sure that:

See A better way to create a customized Ubuntu live usb drive Note: Though it refers to Ubuntu you can adapt it 100% to XBMCbuntu iso, since being a variant of Ubuntu anyway.

In order to do so you need :

First you need to install grub onto the USB's MBR. Follow the link to the Grub4DOS Wiki: Simple example:

Next, you open up the ISO file and extract the files in casper directory. The size (and possibly manifest) are needed if you want to install from the USB flash drive otherwise the install will fail.

Copy grldr to the root of the drive.

Now create menu.lst at the root of USB. Example of menu.lst:

Make sure the path match where the files you copy to.

Another way is just using the ISO file as it is on an already bootable USB flash drive that uses Grub (to create one, see above).

Ubuntu 11.04 is having issues with USB flash drives from SanDisk that have U3 Launchpad. You can either use another brand or use either u3-tool from Ubuntu Repositories or SanDisk's U3 Launchpad Removal Tool to remove U3.

Some BIOS's (eg., the Eee PC netbook') have trouble recognizing that the USB is bootable. You may have to trick it into booting using the following method: At boot, enter the BIOS by pressing F2. Then, right as you exit the BIOS, hit the Esc key. For some systems, this will bring up the boot menu.

The error "Can not mount /dev/loop1 on /cow" is because usb-creator.exe is not creating a valid casper-rw file holding ext2/ext3 filesystem. Fixes:

You need Mac OS X to create a USB flash drive that can boot on Macs. Even so, the process is less reliable than using a CD, as the USB flash drive is not always recognized on boot. Reversely, you can't create bootable USB flash drives for other platforms than Macs from withing Mac OS X. This is because Macs use a custom EFI bios with a custom boot-loader and need a special filesystem layout to boot correctly.

If you are having problems not being able to get the installer to behave, below some steps that should correct that.

These instructions have been adapted from the Ubuntu Community Documentation and credits for its creation are attributed Ubuntu Documentation Team as per their creative commons licence 3.0.