If you want to recieve a TV signal OTA (over-the-air) using an television antenna then you should begin by taking note of which exact type of broadcast standard signals is used in the country and region which you are in. 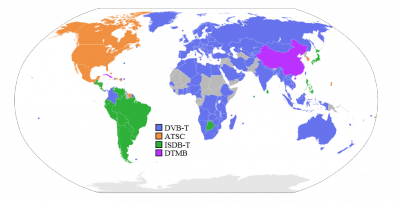 This map from will give you a basic idea of what to look for if you are unsure what broadcast standard your digital terrestrial television signal format is in (over-the-air signals).

If you want to get access to Live TV, EPG and the other PVR features in Kodi running on Android today, then you currently either need to use an IPTV (Internet TV) client or use a workaround such as running your PVR backend on another computer or appliance/device on your local network in order to stream the video to Kodi running on Android, (you can for example run PVR backend (PVR server) software on a Raspberry Pi or mini-PC).

The Raspberry Pi series are technically just ARM-based embedded Linux platforms, but their low price and very capable hardware make it almost perfect as an PVR backend server for Kodi. In addition to this, since a lot of people are using Raspberry Pi and Raspberry Pi 2/3 as PVR backend servers, it makes it much easier for the Kodi community to streamline setup guides and provide help to use Raspberry Pi as a PVR backends due to most of the hardware being the same for everyone. For compatibility and links to these guides please see the Linux matrix above and the community forums.

Simplest is just attach TV-tuner USB-sticks directly to the Raspberry Pi and install a Kodi centric distributions, such as LibreELEC, as they normally include not only an Linux operating-system with Kodi and all the correct drivers/firmware but usually also ships with a scripted installation of Tvheadend or similar PVR backend that is automatically installed when to choose to install the corresponding PVR client addon inside Kodi. However the best idea might be to use a dedicated Raspberry Pi with a simple Linux distribution acting only as a PVR backend server with TV-tuner USB-sticks directly attached to the Raspberry Pi and nothing more than the PVR backend software installed, including no Kodi install on it, in a headless configuration (meaning no TV or monitor display connected). That way you can still access it over the network and it can use all its CPU and memory resources to handle serving as a PVR backend server.