Most of XBMC users are aware that XBMC Live is being released regularly by TeamXBMC, allowing a set-top box experience both running from a CD, a flash disk or fixed disk drive. XBMC Live is a streamlined Ubuntu-based system, optimized for removable media, that once installed on a fixed disk drive is a pure Ubuntu-based system, although customized for set-top box experience.

An XBMC Live system will be exactly like the one that this procedure will generate, except that no build environment will be available by default. Instructions for installing a build environment are under "Optional Installs".

This guide describes how to build an Ubuntu-based system with the minimal set of features that are part of XBMC Live, from which an expert user could start to create his/her perfect setup. The result will be a customized media center allowing the user to add support for specific hardware or providing additional functionalities. Internet access is required during the installation.

Although this guide is not written for Linux neophytes, it is easily followed by anyone who can complete a Linux install.

This guide assumes you are using the Ubuntu 10.04 "Lucid Lynx" Minimal CD. A window manager is not required for running XBMC.

If your processor supports 64-bit, it is recommended you use that version of Ubuntu. Otherwise, use the 32-bit version.

The Ubuntu community provides a handy "Minimal CD image", a tiny bootable CD (<15 MB) to be used to perform a custom installation with a text-based installer. Get the most recent Lucid Lynx ISO image from here.

After starting the computer with either the CD or the USB drive, select "Install" at boot prompt, then when prompted provide info about your location, language, keyboard layout, time zone. Disk partitioning will be basic, the full disk will be deleted and used.

When prompted, create an username for your account. Note that XBMC will run on its own account "xbmc" that will be created later in the install process.

During the installation select "OpenSSH server" as the only option if you want to have (secure) remote connections facilities. 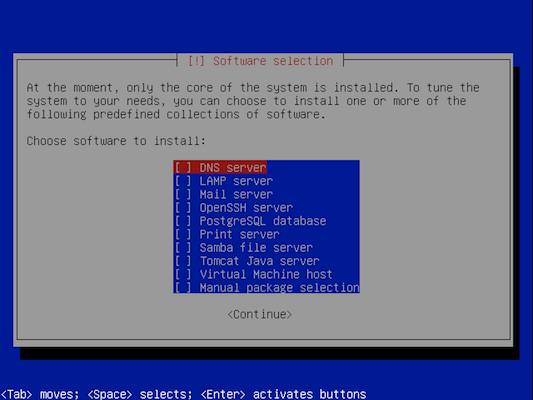 The installer will then download all the required packages and finally the system will reboot. If you installed from USB, you may be greeted with a blank screen with a single blinking cursor on reboot. This is because the installer has mistakenly installed grub on the USB drive instead of your HDD. To fix this, select the USB drive as boot drive on reboot - this will correctly launch Ubuntu. Log in with the username/password you created, and run the following to install grub on your real HDD:

On reboot you should be correctly booting from HDD.

From now on, if you installed OpenSSH, you can SSH from a computer to simplify the rest of the install.

Note: You find newer XBMC packages on this Repository-Overview for Ubuntu 12.04 and older.

On Ubuntu 9.10 or higher, run the following commands:

The core XBMC application and its related dependencies can be installed by typing:

This will take a considerable amount of time since lots of packages are due to be installed.

XBMC requires a 3D GPU (Graphics Processing Unit) that at least supports Shader Model 3.0 and OpenGL 2.0 (that features 24bpp or 32bpp for 3D hardware-acceleration support). As of writing, only Intel, ATI/AMD and NVIDIA have compatible products. However, while Intel drivers are included by default in the standard Ubuntu kernel, NVIDIA and ATI/AMD are not and require additional steps for installation.

Ubuntu has official packages for NVIDIA drivers in their repository. You can see these by:

Looking at the listed versions from the command above enter the following command substituting 185 if you desire a different version:

Latest version available to download is 270.41.06 for both 32-bit and 64-bit platform. This version is okay for audio over HDMI.

binutils and gcc must be installed for nVidia package installer to run/compile. The installer will stop running if those packages are not found on the system.

The driver can be downloaded directly using 'wget' (you may have to install wget, if not installed yet).

If everything goes right, you should see the driver being installed on the screen. For further reading on this, look here

You need a proper xorg.conf file; you can generate a new one automatically by using:

The NVIDIA module can now either be loaded:

Or you can reboot and it will be automatically loaded:

Follow one of the two methods described in the "Unofficial ATI Linux Driver wiki". Manual install is very likely to give the best results.

You do not need a window manager to run XBMC. In fact, your system will be much more lightweight without one. Instead, install the XBMC-live startup script.

The xbmc-live package requires the "xbmc" account, but does not create one. Create one before you install it:

Add the xmbc user to the required groups:

Now to test, logout of your administrative user and log back in as "xbmc". Then run:

If everything has been setup correctly, you should be greeted by the XBMC interface. If not, a likely culprit is your X setup. Check the logfile /var/log/Xorg.0.log. A quick way to find fatal errors is with the command:

If you find problems, try reinstalling your drivers and editing your /etc/X11/xorg.conf file.

If you want to boot to a console for repair without starting XBMC, hold down the shift key when booting and "grub" will give you a choice of "(recovery mode)". Select this and the system will boot to a console. Alternately, you can attach a keyboard and switch out of XBMC to a text console by pressing CTRL-ALT-F1 through CTRL-ALT-F6, you can switch back to XBMC with CTRL-ALT-F7.

The sound level may be set to zero, to change the volumes we need to enter the sound mixer.

Adjust the channels you are interested in. Press ESC to exit out of the mixer.

Save the volumes of Alsamixer.

NOTE: Only if you experience difficulties with audio.

There are a few issues with the current ALSA package shipped with Ubuntu, therefore it might be a good idea to upgrade.

By using this guide.

Credits for the script: Soundcheck/Temüjin on Ubuntu forums

This should download and update your ALSA to the latest version (1.0.24.2 when writing this)

Reboot the computer and check that ALSA is updated, start alsamixer and look in the caption, the version should show there.

By default the sound card will have several channels muted, others with low volumes. You have to find your setup by running

and adjust the channels you are interested in. Once done, save the sound volumes permanently with

By following this guide you can update alsa with a ppa.

By following this guide you can setup audio over HDMI audio for NVidia GeForce/nForce.

If you want to walk on the bleeding edge and follow daily development of XBMC you have to install unstable and all XBMC build dependencies:

7.2 Enable the XBMC user to shutdown or put the computer to sleep

Create a custom-actions.pkla file with the following contents:

Put this in the file.

Put this in the file:

If you want to replace the standard Ubuntu boot screen with a custom, XBMC related one TeamXBMC provides the following in its repository.

To install the logo, type the following:

Put this in the file as last line:

Put this in the file:

If you have an NVIDIA GPU, you may run into trouble with grub doing a proper handoff. Run this sed command:

Update grub and the initramfs.

Credits to eXcyle for creating the logo and to [.A.C.I.D.] for making a tutorial.

7.5 Support for a Remote

If you prefer to navigate in XBMC with a remote, check if your remote is supported by "lirc" on their website, and if it is you can install and configure it with:

7.5.2 Resume from Sleep with Remote

Dvd spin-down is used, eliminating the noise of a rotating disk. How-to for spindown

The eject function in XBMC may not work unless you do the following.

If you see a pop-up about the DVD device being mounted and a complaint about unsafe removal when you eject the DVD, you should disable HAL's polling for DVD insertion. Automounting through HAL is not required for DVD playback.

Create a file named "/etc/hal/fdi/policy/nodvdmount.fdi" with the following contents:

I encountered a lot of playback issues who are related to the powermizer feature of my Nettop. I solved them by adding powermizer settings to the xorg.conf after reading this page: See Link

When connecting the PC to the TV using HDMI, the 4 sides of the screen may be cut off. The recommended fix is to set 1:1 pixel mapping on your display.

9.2.1 Multi-channel PCM over HDMI is broken

Due to a bug in the nvidia drivers version > 185, multi-channel audio (in non-passthrough mode) will be sent as regular stereo. These are the consequences:

When using HDMI to connect the the audio of the PC to a TV, there appears to be a 2-3 second delay after the video playback is resumed before sound plays. The issues does not occur when the the analog audio out is used. More information on this issue is available at: this thread and this thread.