Difference between revisions of "Archive:Chromebox" 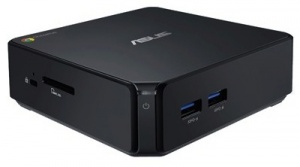 The Haswell Celeron-based Chromeboxes (Asus, HP, Acer, and Dell) are small lightweight x86-64 PCs that natively run ChromeOS, but with a few simple tweaks, have the capability to boot pretty much any Linux distro. They feature HDMI and DisplayPort video outputs (which can be used simultaneously), 4x USB 3.0 ports, gigabit Ethernet, an SD card slot, and built-in 802.11a/b/g/n wireless and Bluetooth 4.0.

Capability wise, these ChromeBoxes fully support hardware accelerated H.264/MPEG-2/VC-1 video playback at up to 2160p24 (4K), proper 24p output, and full 7.1/HD audio bitstreaming (Linux only). 3D playback is supported, though the decoding of MVC streams (as used in 3D Blu-ray ISOs) is not, due to Windows/driver limitations; the hardware itself is capable. Hi10 1080p playback is software decoded, but works well with few exceptions. From a purely Kodi/media playback standpoint, there's no advantage to the Core i3/i7 models over the Celeron 2955U/2957U boxes.

This page is complete guide to running Kodi (formerly XBMC) under Linux on the ChromeBox PCs.

Note: This page was originally written for the ASUS ChromeBox, but nearly all of these steps will be the same on the HP, Acer, and Dell Chromeboxes as well. The hardware is virtually identical: the Acer has a slightly different form factor; the HP model has only 1 dimm slot (vs the 2 the others have); the fan of the HP is also a bit louder than the others (with the Asus being the most quiet); the Dell model has an Intel 802.11ac wifi module, whereas the rest have 802.11abgn.

Disabling the firmware write protect will allow us to shorten the developer boot screen timeout (from 30s to ~1s) in a dual boot configuration, and optionally boot directly to the legacy BIOS (and into Ubuntu or OpenELEC). This is also necessary for standalone setups so that the stock firmware can be replaced with a custom build of coreboot.

With the device powered off and unplugged:

Important: The write-protect screw should be left out permanently.

Putting the ChromeBox in developer mode will allow you to access the underlying Linux operating system features necessary for installing/running Kodi.

WARNING: This will erase all user data on the device.

With the device powered off:

After confirming, the device will reboot and wipe any existing user data - this will take ~5 minutes. Afterwards, the ChromeBox will be in developer mode (as opposed to standard/verified boot mode), and the developer boot screen will be shown at each boot. 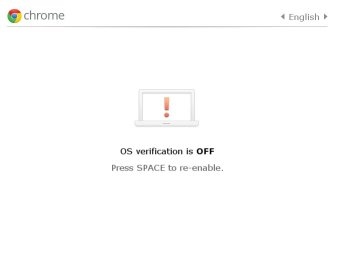 The developer boot screen, shown above, has a warning about OS verification being off. Do not hit [SPACE] to re-enable OS verification, as it will return the device from developer mode to standard/verified boot mode. The ChromeBox must permanently remain in developer mode, else you will potentially have to redo the setup from the beginning. The developer mode boot screen has a ~30s delay, followed by two beeps, before booting. You can skip the delay by pressing [CTRL-D] to immediately boot into ChromeOS.

A factory reset is not needed for a standalone setup, but must be performed prior to any dual-boot installation.

Google's recovery tool seems to be picky about what kind/size of USB/SD media you use. I've had the best luck with 4GB/8GB media, but YMMV. Anecdotally, creating the recovery media from within ChromeOS seems to be the most reliable method.

Note that this will re-partition the internal hard drive and restore the original copy of ChromeOS, erasing anything else on the drive. The ChromeBox will still be left in developer mode, and if you changed the Boot Options they will still be set - so be sure to reset them back to the 'ChromeOS + 30s default' option before performing a factory reset. If you forget to do that, you'll need to press [CTRL-D] on the developer boot screen (or before the legacy boot/SeaBIOS boot screen) in order to boot ChromeOS after performing the recovery.

If you're having trouble creating the recovery media using Google's recovery tool above, you can manually download the recovery image and write it to a USB stick:

Kodi can be installed on the ChromeBox in a variety of ways. The two most common are via OpenELEC or Ubuntu+Kodi, in either a standalone or dual boot configuration. This is accomplished via the ChromeBox E-Z Setup script, which must be run (at least initially) from ChromeOS.

The EZ setup script will facilitate everything needed to install either a dual boot setup, or install a custom firmware which allows the installation of any Linux-based OS in standalone mode.

Full instructions and a detailed explanation of the script's functions and usage can be found at the following forum thread: http://forum.kodi.tv/showthread.php?tid=194362

Note: If installing a Linux-based OS other than OpenELEC, you may need to manually update the kernel for optimal operation. Kernel version 3.14 is the minimum recommended; 3.16 has a fix for most MCE remote controls, and 3.18.4 has a fix for an Intel GPU bug that can cause hanging during video playback.

When dual booting with ChromeOS and OpenELEC/Ubuntu, due to the ChromeBox's firmware setup, there is no conventional boot menu. Instead, the OS selection is made via keyboard shortcuts on the developer mode boot screen (shown above): [CTRL-D] boots directly ChromeOS; [CTRL-L] boots the legacy BIOS (and whatever secondary OS is installed). The default OS and boot timeout are set using the 'Set Boot Options' feature of the EZ Setup Script.

The Chromebox is, at its core, a standard x86_64 Intel system (albeit, like the NUC, with an ultra low power processor). The standard OpenELEC builds - labeled 'Generic x86_64' - work perfectly well, and it is recommended to use OpenELEC's auto-update feature (System --> OpenELEC --> System --> Automatic Updates: auto). If that doesn't work for some reason, or you want to update to a nightly/beta/RC build, you can manually update using the instructions on the OpenELEC wiki.

No Audio and/or corrupted video on Wakeup from Suspend:

For standalone Ubuntu (or any other distro) installs, you will need to update to a 3.16 (or later) kernel.

then save, exit, and reboot.

The ChromeBox does not have a built-in IR sensor, and must therefore use a USB IR receiver (or a Bluetooth remote). In general, any remote/receiver listed on the Kodi wiki as fully working under Linux should be fine, though some have issues when connected to USB3 ports. A Microsoft eHome compatible remote/receiver is one of the most compatible, subject to the limitations listed in the 'Known Issues' section above. Specific models tested as working include:
NOTE: If you need to re-map remote buttons, you can use the Keymap Editor Add-on to do so.

As the ChromeBox only has HDMI and analog audio outputs, if you need SPDIF, then either a converter or external/USB device must be used. The following devices have been tested/confirmed working:

The most common issue with dual boot setups is being stuck on the black SeaBIOS boot screen, with the "booting from hard disk" text displayed. 99% of the time, this is due to not having performed a factory reset using the recovery media, as listed in the Device Prep section above. Simply perform the factory reset, then re-run the dual boot setup using the script as before.

If you're looking to run a standalone setup, and the install media created by the script doesn't work (or you forget to create it before rebooting), then you can simply download the latest stable version (or beta/RC if you'd like) from OpenELEC's website here. The ChromeBox runs the 'Generic x86-64' version of OpenELEC, and it's recommended that you download the disk image version, and create the install media, as per the instructions on the OpenELEC wiki.

If the system isn't shutdown cleanly, sometimes a filesystem check (fsck) will be automatically performed. In some cases, the automatic repair is unsuccessful, and an error will show:

In this case, simply run fsck manually as instructed, using the following commands, hitting [enter] after each:

For a standalone setup:

For a dual-boot setup:

After the fsck is run, type 'reboot' then hit [enter] and the system should boot normally.

The ChromeBox's firmware consists of two main parts: the firmware itself (coreboot), and the Legacy BIOS (SeaBIOS). Users running a dual-boot configuration only need be concerned with updating the Legacy BIOS portion. Users running a standalone setup should update the custom coreboot firmware only, as it already contains an updated SeaBIOS payload, which is not able to be updated separately.

Dual-boot users should simply boot to ChromeOS and re-download/re-run the setup script, choosing the Update Legacy BIOS option under the Dual Boot heading.

Standalone users should also re-download/re-run the setup script, but instead choosing the coreboot firmware install/update option under the Standalone heading. As of v3.0, the script can be run under any version of Linux with a full bash shell. As OpenELEC does not have a full bash shell, OE users will need to use the standalone firmware update script, as described in this forum post.

If you have used the ChromeBox Setup Script's Standalone setup option, or otherwise manually updated the ChromeBox's firmware with a custom coreboot build, it is necessary to restore the stock firmware before performing a factory reset to re-load ChromeOS.

In order to do this, we will create a bootable USB stick with ChromiumOS (the open-source version of ChromeOS) and use that to re-flash the stock firmware, which you backed up before flashing the Coreboot firmware. If you didn't make a backup, we can use a copy extracted from Google's recovery image, but an actual backup is preferred.


You can now remove the ChromiumOS USB drive (and firmware backup USB drive). Proceed to Perform_a_Factory_Reset above to restore/reload ChromeOS.