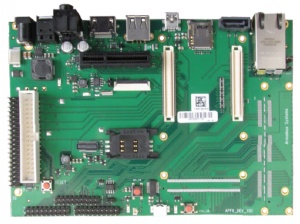 APF6Dev is the Armadeus Systems sixth-generation family of multi-purpose ARM+FPGA-based System On Modules (SOM) with it's development board. It is capable of running either Kodi on Android or on Linux, using firmware images generated by Buildroot adaptation provided by Armadeus Systems development team.

The easiest way to use Kodi on an APF6Dev is to install a Kodi-specific Buildroot generated OS image to the APF6 onboard eMMC. The APF6Dev will boot directly up into Kodi and nearly every setting can be easily configured within the Kodi GUI

Kodi can also be installed onto an APF6Dev that is running Android using the normal Android instructions.